It’s a common skin condition that we see in our office weekly, and it’s believed to affect more than 14 million Americans….Rosacea. Usually it starts to appear on places like your chin, nose, cheeks and forehead. But unlike other skin conditions, rosacea usually appears between the ages of 30-50 and sorry ladies, but it affects you more than men. The occurrence of rosacea is about three times more in women, than it is in men.
At first, it may seem like a sunburn that doesn’t seem to go away and you may flush more often. Small bumps called papules may grow and pustules may form. Unfortunately, there is no cure for rosacea but once you are aware of what triggers it and on a proper regimen, your condition is manageable. There are plenty of celebrities that live with rosacea including former President Bill Clinton, Cameron Diaz and Renee Zellweger and they all look fabulous and so can you.
The National Rosacea Society, which conducted a rosacea survey, discovered that close to 70% of Americans with rosacea felt a low self-esteem, while more than 40 percent began shying away from meeting people because of embarrassment. If you start to notice the symptoms of rosacea, don’t wait to make your appointment with us. 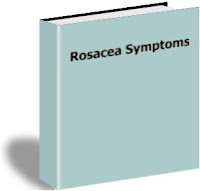 Symptoms of Rosacea:
~Flushing and facial redness
~Bumps or pimples on the skin, either small and solid (papules) or pus-filled (pustules)
~Stinging sensations that may be more noticeable when smiling, frowning, or squinting   Cleansers, cosmetics, or other facial products may increase the irritation
~Thickening of the skin of the nose
Like I mentioned above, knowing what triggers your rosacea is key…there’s some factors that many people seem to fall under like exposure to the extreme heat and cold conditions, spicy food, alcohol and some medicines and cosmetics.
We’re always here to help, so if you think you may have signs of rosacea come see us!
www.germaindermatology.com
Here’s our great specials for February 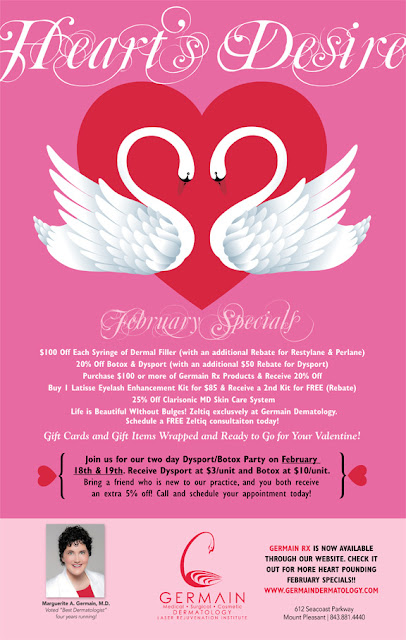